When I was 18, I used to drive to Uni in Coventry on a brand new Lambretta SX150 scooter. This got me about in all weathers until at 20, I upgraded to a second-hand BSA 500 twin motorcycle. This upgrade was limited by economics, because I wanted more power but couldn’t afford a car. I have fond memories of driving down country lanes in summer, wind in the hair, bare chest and shorts, sharing the seat with a girl on the back in a bikini. If this sounds too good to last, it was, because another winter in snow and freezing fog finished my desire to stay on two wheels.

My first car was an old Austin A30 in blue/brown. The blue being paint and the brown being rust. In winter in the Midlands in the UK, you could expect a foot of snow on the roads followed immediately by a foot of salt. This may be an exaggerating a little, but we often found ourselves following an open truck which had two guys standing in the back shoveling a mixture of grit and salt onto the road as they drove along. No work-safety or environmental concerns back then. This method produced three effects; it turned the road into a kind of continuous zebra crossing of white/black slip/grip, it created work in spring clearing the drains of grit, and the bottoms of all the cars fell out. But at least it kept the traffic moving. With this knowledge you may now understand why my first car was such a mess, and why it only lasted a few months. The left hand outer sill fell off under its own weight as I drove down a straight flat road, which prompted my search for another car.

I was still a penniless student, but I was also an apprentice at British Leyland Engines Division, which is why I bought a worn out Morris Minor. It was blowing great clouds of smoke, and I can remember watching one of the wiper arms flying off into space as I drove my new purchase home in the rain. Not a good start, but within days I had fitted a reconditioned engine and gearbox, and fixed anything else that needed fixing. I thought it looked really flash after I painted it using oil-based paint and a brush, chocolate brown with a bright yellow roof (well it was the 70’s). 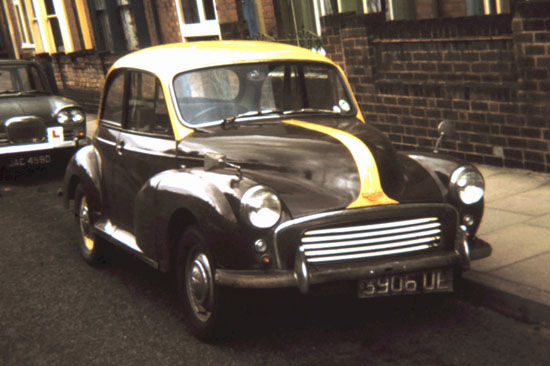 This reliable little car got us about for a few years until our first child arrived, when it was replaced by a Morris 1000 Estate – that’s a pommie word for Station Wagon, which was fondly referred to as a Woody. At some time during the next five years before we came to Australia, the woody got replaced by an Austin Maxi.

So maybe it was nostalgia that prompted me to recondition a 1956 Austin A30 in 1993. We had no garage at that time, but since I was looking after my neighbour’s empty house she let me use her car port. My youngest daughter, Nicola, helped me while she was looking forward to getting her L plates, and we shared many a happy hour grinding in valve seats etc. and reassembling the car. It proved to be a valuable lesson for her before she began to drive, and in later dealings with garage mechanics. The A30 was finished in April 1994, just after Nicola was old enough to get her learner’s permit, and we (Nicola and I) immediately took a road trip in it, from St. Clair to visit my brother in Killarney (just east of Warwick but still in NSW), taking turns at the wheel. A brilliant trip, when, for once, the drive, not the getting there, was the goal. My renewed affair with Austin (the car) and Morris (I fitted a Morris 1000 engine) lasted over 7 years.

This how the two old girls in my life looked some 7 years later -my wife Ann (current AMVCNSW Treasurer) and the A30. The three of us went to many places near and far, including north to Toowoomba, and south west to Adelaide.

Like many relationships though, ours came to an end when I fell for a younger more attractive model. No, not the wife, the car. In 2001 I bought an A105, twin carb straight six 3 litre automatic, with leather seats, so because of a shortage of space the A30 had to go to a new home. 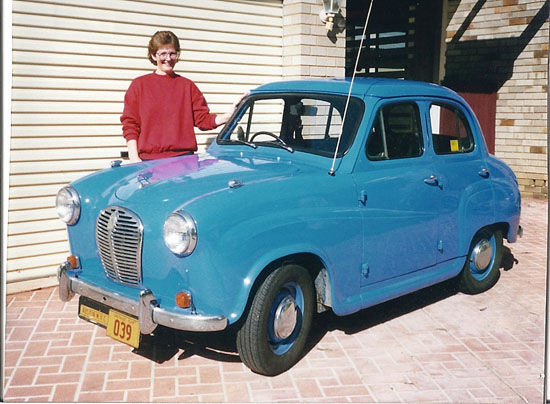 The A105 was fully registered when I bought it, but really needed plenty of work, such as re-wiring, to make it sound. This I did with relish in the first couple of years, leaving me to enjoy driving it since then. It was nice to see another A105 in 2011 at Forbes AOA, the only other A105 that I have seen in 12 years. My car is closer to the camera, alongside a repainted A105. 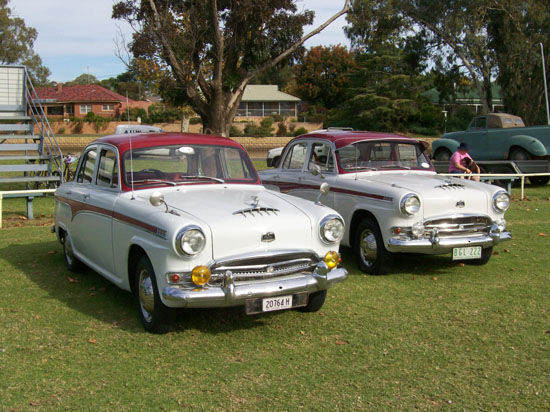