A short history of my Austin A90

During the years 1962-1966 I was the proud owner of a 1957 Morris Marshall, which at the time was a up-market vehicle when new in comparison to the very popular Holden. The other advantage for this car plus the Austin A90/A95/A105 range of vehicles they were very fast in comparison to Holden/Falcon. The only faster cars were the up-market American and English sports cars. I will advise that my Morris could keep up with the Valiant at that time although I could not pass itl! This was also the HOON period of my life.

Due to a vehicle supplied with my employment at the time I sold the Morris Marshall to Andre Hummell. In the late 1990's I thought to myself "what will I do to amuse myself, when I retire". I decided I should get another Morris or Austin. I then started to look at ads in Sydney newspapers, the first car I seen was an Austin A95 in a dismantled state, and the engine was reconditioned some 15 years earlier and never refitted. I purchased this car and on further inspection it had rust in several places which for my very limited experience I thought was beyond my capabilities to repair. 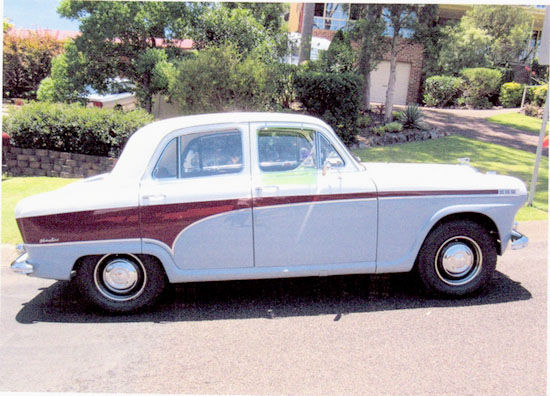 At the same time an Austin A90 was advertised, which was listed as rust free and needed full restoration. I rang the phone number supplied and identified myself as Bob Stevens and the person confirmed his advertisement. I noticed the phone number supplied appeared to be Canberra / South Coast area and suggested I visit on a trip to visit my Daughters in Canberra at the same time. He then advised there was another problem as the car was not in Burmagui but in Dubbo. Not a problem says I, "I will go to Dubbo and see my Mother at the same time". He then asked my name again, he then identified himself as Gus Hummell, the brother of Andre Hummell who I sold the Morris Marshall to, some 32 years earlier.

I then arranged to meet him in Dubbo and on inspection I purchased the A90. Due to brake/fuel supply/water pump problems the car was transported to Eleebana on a trailer. The A95 was completely dismantled to keep for spare parts. The bare body went to Sims Metals.

I have over the following years I undertook the following work on the A90 fitted the reconditioned engine, with new clutch assembly, including surface grinding the fly wheel,

* Rebuilt the water pump, rebuilt two distributors (one as a spare)

* Replaced all bearings, synchromesh rings, rebuilt lay gear, lay shaft and fitted Austin Healey side gear shift in place of the original steering column gearshift. This makes a much more pleasant gear shift than the original. I quote from a road test at the time the car was released from "Motor Sport" "WHO EVER DESIGNED THE AUSTIN GEARBOX, TOGETHER WITH THIS GEAR LINKAGE, SHOULD QUICKLY BE FOUND OTHER EMPLOYMENT."

* Front and rear universal joints have also been replaced, brake hydraulics have been completely rebuilt including stainless steel brake hoses, brake shoes have been re bonded and brake drums have been machined (including second set for a later time).

* The car has also been fitted with a PBR VH44 vacuum booster, this of course reduces the amount of effort required to use the brakes. Clutch hydraulics also have been rebuilt.

* The front spring seats I made up from a worn out go-cart tyre and cut to shape.

* Front and rear wheel bearing and seals have also been replaced. The front wheel bearing are a special thrust ball type with no Timkin replacement. I would have converted to Timkin if I could have done so!

* The front shock absorbers have been reconditioned and I have fitted a front sway bay (which is a straight bolt on) from Austin A99/110. This makes the car more stable and reduces load on the front shocks.

* I have fitted a trunnion bearing conversion kit which has roller bearing in place of metal washers. This conversion reduces the amount of effort required to steer the car.

Like all English vehicles the car runs hot according to the temperature gauge, although it has never boiled. I have since fitted a water recovery tank and electric fan for ease of mind. Some years back I was offered a spare engine/S.U. carbs (Ed: carburetors) and other assorted parts. The statement was made if I did not take the parts it would all go to the tip! I now have 2 spare engines!

As some people know I have a soft spot for S.U. carbs and fuel pumps. I completely rebuilt the carbs and fitted them to replace the Hitachi carbs that were fitted to the car. I have also fitted a double ended pump to the car. Over the years I have rebuilt many S.U. fuel pumps and depending on the cost have sold/donated them to members /public at a cost of parts basis purely for the enjoyment of working on them. Even at present date 25/12/14,1 have rebuilt two pumps in the last week. The electrics of the vehicle has been upgraded with the following, Hella quartz halogen headlights, reversing lights and alternator, it is now converted to negative earth.

During the period 2011 and 2014 (with many breaks in between) the car has made a considerable transformation in appearance. The sills have been replaced and all rust has been cut out and replaced with new metal. The car has panel beating where necessary. We have fitted extra chrome mould strips from the A95 that was dismantled and this has given a line to repaint in tri-colours which I believe looks terrific!! All rubbers have been replaced.

The interior/upholstery has all been replaced in Port Royal/Silver Haze colours in vinyl and also looks very presentable. I would like to thank Ron Partlett for the terrific effort that he did to bring the car up to the standard it is today. I would also thank Warren Frost and Pat Goulding for their help in restoring the Austin.