About six months after arriving in Australia from Malta as a migrant in 1955 I purchased my first car. It was a green Austin A90 Atlantic convertible. This car was with me until 1968 when I traded it in for a Holden HB Torana which I still own. I have always regretted not keeping my A90, but at the time I had very young children and it was not practical as a family car. When I retired I decided to take on the hobby of old cars. In 1997 I started with an FJ Holden sedan then a 48-215 Holden sedan, and an EK Holden sedan.

In 2005 I purchased an Austin A90 Atlantic convertible, at last I had my favourite car again. Each car took at least two years or more of back to bare metal complete restoration. I do all my own work except the chroming and some upholstery. 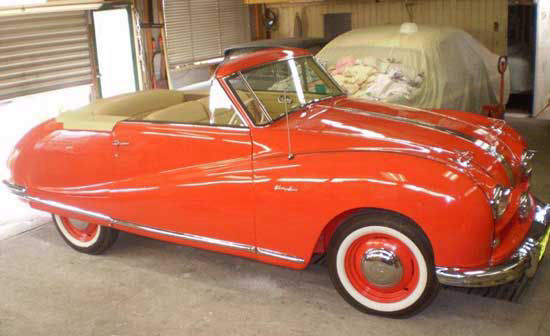 My Austin came from Victoria and is a 1950 model first registered in Victoria February 1951.When I went to view it I was not expecting the sad sight which confronted me, it was in a very distressed state. The 'For Sale" photo in the magazine, showed a complete vehicle, it turned out the photo was 18 years old. What was actually being sold was a shell with tins of bolts and screws, boxes of parts, seat springs, wheel rims, doors etc. It had no hood but it did have plenty of rust, which I had removed by a chemical dip. However I purchased it for a very good price in the end and I could see the potential even if it was going to be a big job.

I registered it for the first time in 2010 and I joined the A90 Club of Australia. Because they only meet once each year in a different state for their AGM we didn't find it suitable. That is the reason we sought an Austin Club in Sydney we could attend and meet like minded people.

I love my Austin A90 because each time I drive it, it brings back all the great memories I had with my first A90. In the last fortnight I have purchased my fifth restoration project, it is a Morris Minor 1000. This will be my last project as I have now run out of garage space to store anymore.